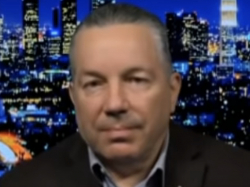 TUCKER CARLSON, FOX NEWS: Southwest is not the only institution that’s been burdened with these mandates, so has the LA County Sheriff’s Department. The Sheriff in LA County, Alex Villanueva says he will not enforce the mandate in his department. He is a Democrat, we should tell you. He joins us tonight to explain why.

Sheriff, thanks so much for coming on. I’ll just throw it to you. Why are you taking this very public step to defy this order?

SHERIFF ALEX VILLANUEVA, LA COUNTY: Well, it’s very simple. I have — I know my employees very well and I cannot afford to lose five to ten percent of my employees overnight who will react to someone trying to impose something and remember, I believe in the vaccine. I believe in the science.

But if someone else who was an employee does not believe in that, who am I to impose on them my belief system? And they’re going to vote with their feet. I have people near retirement, who can just simply just walk away, no harm no foul. I have other people who can claim Workers Comp injuries, call in sick, and then all of a sudden we’re dealing with a homelessness and a homicide surge that is of gargantuan proportions.

And I have a board of supervisors who are embracing this woke alternate universe where somehow they just you know send off edicts like Moses coming down from the mountains and everybody is going to snap to attention and make them happen. I have to deal in reality and that is a very dangerous and a nonsensical mandate.

CARLSON: Well, yes, I mean, you run — I think LA County, it is certainly one of the biggest counties in the country, maybe the biggest, I can’t remember but it’s huge. Did you tell them if you force 10 percent of my workforce to quit, people will die? I mean you must have made that case. What did they say?

VILLANUEVA: Well, remember, this is the same county that’s sitting on a $2 billion surplus while they are defunding only one department, law enforcement, as we have a 54 percent surge in homicides, we have a quarter of the nation’s homeless in our county and more are coming and they have no plan for that except, the only thing they can seem to agree on is, let’s keep defunding law enforcement and see how it works out.

Well, that is — that’s just woke privilege speaking really because the people who are going to be harmed by that are the people expecting someone to show up when there’s a 9-1-1 call and there’s no one there to either answer the call, go to the call, investigate the crime, and actually hold people in jail when we’re being defunded.

Heck, they want to close the nation’s largest jail with no alternative and everybody, I guess, walk away.

CARLSON: I hope you run for office. I think a lot of people would vote for you no matter what party you’re representing because we’re so desperate for people to speak as you just did. Sheriff, thanks so much for coming on tonight. I appreciate it.