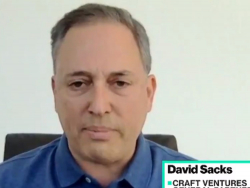 “Craft Ventures” partner and former PayPal COO David Sacks was asked Wednesday during an interview with Bloomberg TV’s Emily Chang why he is hosting a fundraiser later this month for Florida Governor, and “divisive figure,” Ron DeSantis:

EMILY CHANG, BLOOMBERG: Why do you support such a divisive candidate, especially given the global health crisis we are facing?

DAVID SACKS: why is he inherently more divisive than [Democratic California Gov.] Gavin Newsom on the other side of the spectrum?

What I would argue is that words like “polarizing” and “divisive” assume a normative baseline in which everybody agrees. Everyone in the tech industry agrees because they all come from a certain information bubble and anyone who deviates from that orthodoxy is perceived as divisive.

I would argue that in the country, there is a multiplicity of views, and you’re not divisive just because you don’t agree with the orthodoxy of Silicon Valley.

EMILY CHANG: So, but why DeSantis over many of the other candidates who you could host fundraisers for? I know you’re bullish on Florida, but DeSantis and [Miami] Mayor Suarez, who was actually on the show last hour are on very different ends of the spectrum.

DAVID SACKS: I’ve donated to both of them. I like Suarez because he’s been extremely welcoming towards the tech industry in Miami, I think that is a smart strategy. I don’t get why the politicians in San Francisco don’t do that. They’re killing the golden goose.

In terms of why I like DeSantis, he was the first governor to top these insane lockdowns. He found the right policy on lockdowns, which was to stop them, despite a hostile media. I respect that. When somebody takes the right position on an issue, despite the hostile media, that’s something I can really respect. That’s why i support him.

Watch the full interview below, where Sacks defends Facebook from calls to break it up, via Bloomberg: